How mowing can make a difference 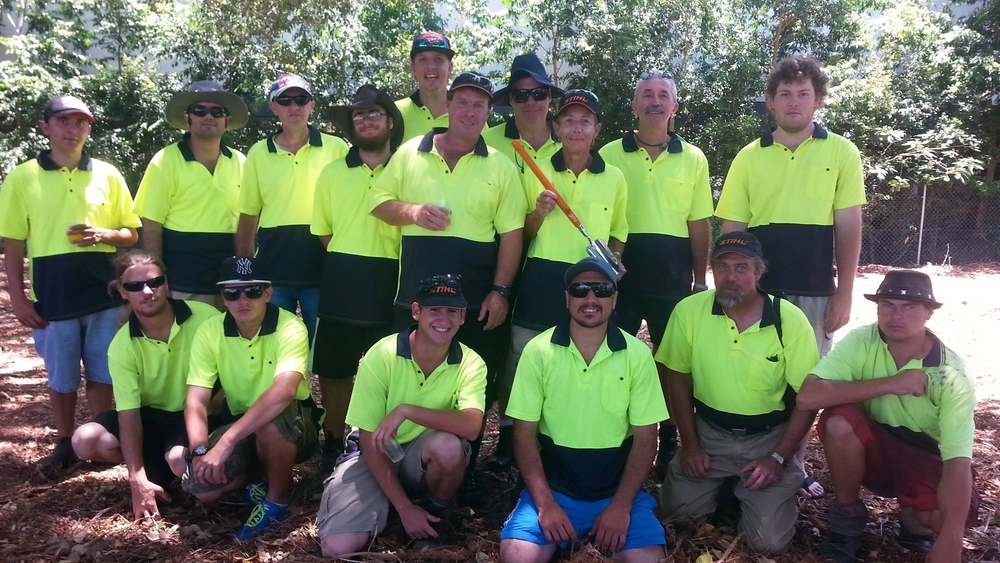 Jen Stuart with the Abilities Plus Permaculture Team.

Jen Stuart used to earn a living by cleaning floors at night and lived in a caravan on someone else’s property. Unable to pay for the caravan up
front, the property owner suggested that Jen pay it off by maintaining the grounds of an 8.5 acre fruit tree plantation belonging to her brother.
“He rocked up one day, gave me a whipper snipper and said ‘here you go’! He had a fruit tree plantation with avocados, custard apples, lychees, and
other exotic fruit which he used to sell to the markets. So he gave me a brush cutter with a blade on it, and by the time I had got around 8.5 acres it was time to go round again, and around, and around… and that is how I learned,” Jen said.
Before long, Jen had bought a small business of her own.
“It was eight clients, two old mowers that only lasted a month, an old whipper snipper and a little box of bolts, nuts and nick knacks, and that is how I started!”
As the business grew, Jen casually employed students to help out during holiday periods, but it was around the year 2000 that the business, and her life, started to change.
“Not long after I had the business, a lady kept annoying me and asking me ‘do you want any more staff?’ I kept saying no, but in the end I said ‘oh yeah ok’, just to keep her quiet! And what happened? Well it changed my life. The day that I employed this young person, who had a disability, I found my purpose in life. That is the only way I can explain it,” she said.

OVERCOMING CHALLENGES
The young man Jen hired had an intellectual impairment, and after word spread she received an increasing number of requests from people to help
their children or relatives who desperately needed a chance in life. Jen soon realised that saying yes came with subsequent challenges.
“I realised that giving them jobs was great, but it was not enough, because a lot of them had not had an education either,” she recalled.
To Jen’s credit, she went to TAFE and obtained a Certificate III in Horticulture, then Certificate IV, and eventually her diploma. This was followed by certificates in Training and Assessment, as well as modules to Address Adult Language, Literacy and Numeracy, which enabled her to give students other essential life skills. Jen now teaches a total of 26 students. Over the last two to three years, Jen has seen more female students participating. Students range from 19 to 65 years old and come from a variety of backgrounds; some disadvantaged, some with intellectual disabilities, and all with different capabilities. 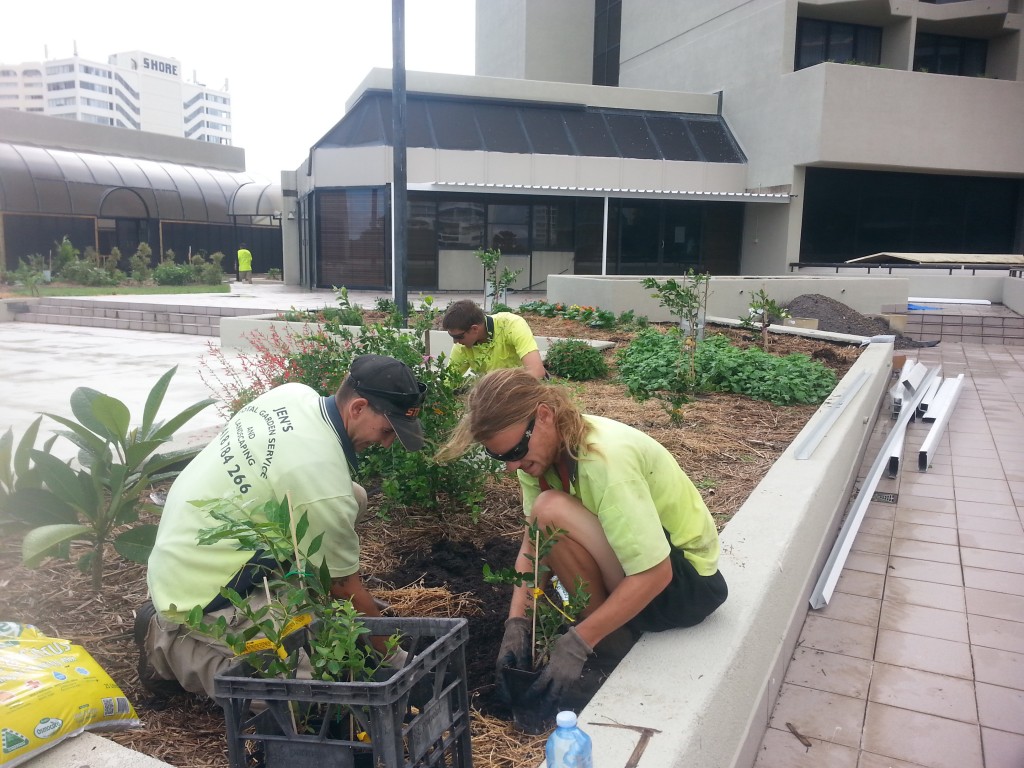 Students attending the food forest at the QT Hotel.

EQUIPMENT AND SAFETY
Jen started her business with equipment purchased from Hinterland Mowers in Nerang, on Queensland’s Gold Coast. After her first mowers broke down she bought a Honda push mower from Hinterland, and maintains exclusive ties with the company today. “We buy every machine from them. I have a good rapport with owners, Chris and Andrew, they are very supportive of what I do – the kind of support that keeps you going when you are financially strapped. They deserve an award for putting up with me,” she said.
Jen believes in occupational health and safety.
“If I want to help these people, then occupational health and safety is top of the priority list,” she said.
Equipment checks are performed every morning. Jen’s fleet is comprised of 13 Honda push mowers, a John Deere ride-on mower, two Honda hedgers, two Kawasaki whipper snippers, and a Stihl chainsaw that is strictly withheld for her use.
Jen’s students are taught about equipment handling in the safety of a classroom before monitoring them in the field when she feels they are ready.
“If I do not feel that they are competent then I will not let them use it. I do not care how long it takes. It takes some six months before I know they are fully competent. It is a wonderful thing to be able to teach somebody and then have them go out and get a job, knowing they will be safe when mowing,” she said. 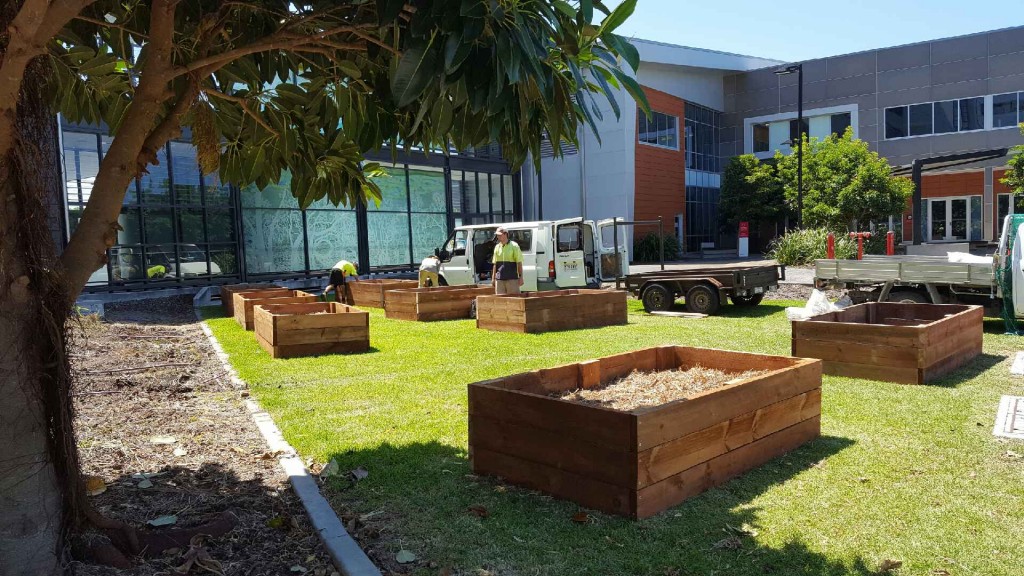 DEVELOPING SKILLS
In addition to power equipment usage, Jen teaches her students a variety of horticultural skills.
“They can do lawn mowing, gardening, whipper snipping, weeding, and in the last three to four years, I’ve added a woodworking class,” she explained.
Students learn to construct timber wildlife nesting boxes, which are then sold to customers and used throughout the local community. They also construct timber vegetable boxes, which are sold as packages with organic vegetable seedlings and compost. They’re also skilled in laying turf, laying pavers, weeding, brush cutting, manual irrigation and nursery operations.
Part of what makes Abilities Plus unique is what Jen teaches students in addition to power equipment usage. Being in a classroom situation provides them an opportunity to socialise and therefore learn other important life skills – an opportunity they may not have otherwise had.
“Everybody in this world, no matter who, needs an opportunity and a chance to learn. Everybody is worth helping,” Jen said.
Part of Jen’s philosophy is to be kind to one another, which goes alongside teaching manners and respect. She strongly encourages students to go out in the world and socialise as a group.
“They’re like a family,” she said. 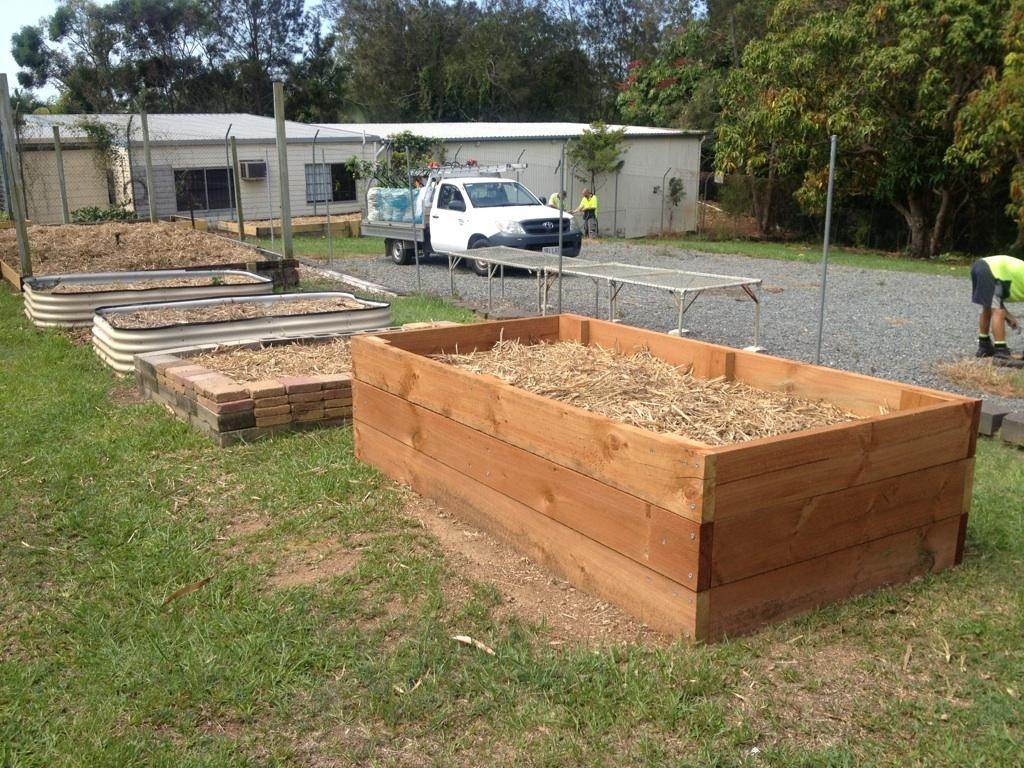 PROJECTS AND COMMUNITY BUILDING
Building the business and Abilities Plus has relied heavily on reciprocity. The classroom is located within a community centre in Nerang, which they use in exchange for maintaining the lawns and gardens at the centre. The nursery takes up a section of a community garden in Carrara, which they again occupy in return for lawn and garden maintenance.
From there, Jen attributes a lot of the business’ growth to her solid reputation she has built; there are always good opportunities for students to use their skills. She has been able to employ 15 of her students within her business. Some of her employees who have been with her for several years have moved into supervisory roles training new recruits.
Abilities Plus is currently involved in a program called ‘Seed to Plate’, in which students have constructed a food forest on level two of the QT Hotel. They cultivate the plants, harvest the produce and deliver it to the hotel’s kitchen to be plated.
They have constructed eight vegetable boxes for palliative care patients at the Gold Coast Hospital, and set up an organic garden at Southport High School so years 10 and 11 students can learn about organic produce. Abilities Plus also runs a weekly organic vegetable store at the Carrara Markets.

THE FUTURE
The future of Abilities Plus depends on funding and donations, as well as hard work.
“I have not taken a wage in all these years. I survive, do not misunderstand me, every dollar that I make goes back to Abilities Plus to be able to look after these people. Everything we make goes into Abilities Plus,” she said.
“There is a lack of funding programs and a lack of interest generally in helping disadvantaged people once they reach 21 years old,” she explained.
Being an Endorsed Deductible Gift Recipient means that all donations made to the organisation over $2 are fully tax deductible.
Her tireless work ethic has seen her win a mountain of awards, most notably an Australian of the Year Awards Nomination in 2015.
Through all of her hard work, Jen’sattitude remains inspiring.
“I work seven days a week, and the last day off I had was in 2009 – but I wouldn’t change what I do.”