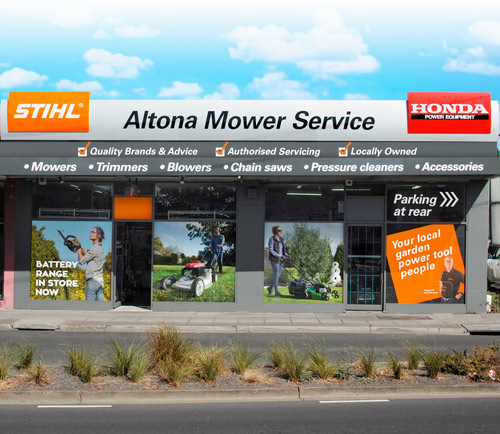 Altona Mowers has been a ‘stayer’ in its local community, according to co-owner Greg Loft. In a time where local mower shops are thinning in numbers, Greg explains how moving with the times and increasing the sales floor has led to dramatic improvements in his business, and voices his concerns for the future of the industry.

Altona Mowers has undergone several significant transformations since it first opened as a combined hardware store and mower shop during the Sixties. Originally named Dependable Mowers and located in Essendon, Victoria, the shop’s current co-owner Greg Loft, says the previous owners eventually moved the shop to its current location in Altona North, where it occupied a tiny single-fronted shop and was renamed to ‘Altona Mowerpower’.

“When I visited the business back in the Eighties before I bought it, it was that cramped that the guys used to have to do the repairs out on the front footpath. It was an incredibly messy looking business, but that was just due to lack of space – but it was very viable,” Greg said.

“The retail space would probably have been an area that measured maybe 3m x 4m. It was just the very front of the shop and you were lucky to fit five or six lawnmowers in and a few brush cutters on the wall… it was definitely lacking. But that was the choice of the previous owners to make it just a repair business.”

“But the shop has evolved to something different, only because it had to,” he said.

“People can’t walk into these shops and just expect repairs. They want to be able to buy product as well. And obviously if their equipment is unrepairable then you need to have something to sell them. So I ended up moving into the second store, which is next door,” Greg explained.

He said that the expansion increased retail floor space by four to five times its original size, which made it a totally different business, particularly in regard to the brands it stocks.

Masport, and particularly its lawn mowers, has played a significant role throughout the shop’s extensive history, and continues to be amongst his best-selling mower lines.

“This business really started selling Masport probably almost from day one,” he said.

“With Masport, it’s a bit closer. You get to know the people in the business. They know you on a first name basis; you feel better dealing with them. You feel like you mean something to them… it’s a great company to deal with – very genuine. You’re not just a number with them. Even though I’m not an enormous player in the game, you’re made to feel like you are.”

“I do buy a lot of Masports before Spring. We have a pre-season situation where I usually buy 70-80 mowers and sell them over the season. I’m by no means a big dealer but I do support Masport pretty heavily,” he said.

But Greg explained that the expansion meant being able to take on more brands.

“It looks a lot more professional than it did, but that’s also due to the fact that we’ve taken on STIHL in October. It’s been a mammoth challenge but it has increased retail dramatically just through the brand,” Greg explained. 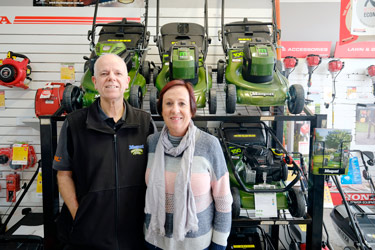 “Because of STIHL, all of a sudden their products and their brand have almost taken over our sales in handheld equipment, as in chainsaws, brush cutters, blowers, that sort of thing, because STIHL aren’t heavily into lawnmowers. So that’s kind of moved the goalposts for me to a certain degree, but it really hasn’t affected my mower sales, obviously. All it has done is brought in more foot traffic, so that’s made it better. I don’t sell any ride on mowers, very few if any. But over time, because of STIHL coming onboard, I now sell a broader range of equipment.”

Given the shop has been established for 30+ years, Greg reports that it is highly recognised amongst several generations of local families.

“We’re pretty much on our third generation of people coming through; and often people drive from outer areas to come here because they know this business pretty well,” he said.

He explained that the local community in Altona and surrounds is mostly affluent, and people take great pride in looking after their yards; but that traditional customer base is expanding.

“This business sort of built its backbones on those people,” he said.

“Because of the improvement of the retail space, it just makes the shop look as if it’s a more approachable business, so larger professional companies are coming through [the doors] almost daily – so that’s been a bit interesting for me. I need to move along with this and embrace it, hence I need someone to give me a hand out the front because things just get a bit too busy.”

“I’m endeavouring to get another full-time retail sales person, but that will probably be in Spring.”

But like most OPE dealers, Greg knows that hiring new staff in the OPE industry is not easy.

“No one sits up in bed in the morning and says ‘gee I’d love to be a mower mechanic!’” he laughed. “It’s not something you really want to be. But in saying that, I’ve been doing this for over 30 years and I’m still here. It’s quite a diverse job, particularly if you want to get involved in out the front and work in retail. And if you’re smart enough it can lead to you starting your own business or taking over the one you’re in, so it’s quite a good vocation so to speak – it just depends on your attitude.”

Prior to purchasing his own dealership, Greg completed his apprenticeship as an automotive technician and went on to became a TAFE instructor. He says that after being in the TAFE sector for a number of years, he can see the way the industry has diminished in regard to new recruits, and believes that Australia really needs to re-embrace trades, particularly in OPE.

“I’m a bit passionate about it, but I’d love this industry to keep going. But we need to try and encourage young people into it. Whether that’s a government-driven initiative, I don’t know,” he said.

“I’ve spoken to a lot of reps and this industry still has a lot of future. We’re still needed. All the ‘cowboys’ are gone now: all the ones who weren’t doing the right thing. And most of the shops that are around now have been very well established and so they’ll be here for a long time.”

“I’ve always said, and I know it’s wishful thinking, but I wish that all the major companies would have banded together as a group to actually advertise to the masses about the power equipment industry; not just flogging their own boat, but about generally coming into these types of businesses and these shops. It’s never going to happen, but it would have been good if they had have pooled money and did that,” he said.