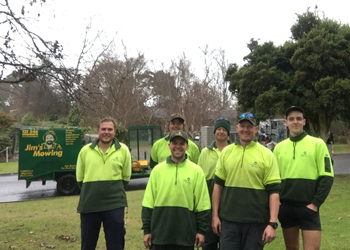 How does one go from being a bank manager to a successful lawn and garden maintenance contractor? If you ask Mathew Wandmaker, owner of one of Melbourne’s largest Jim’s Mowing franchises, the answer, quite simply, is to follow your passion.

For Mathew, apart from being out of an office away from the drudgery of the corporate world and now out on the tools every day, the two are actually quite similar.
“It’s all about communication and relationship building to be honest with you,” he said.
“Maintaining a property is the relatively easy part. It’s dealing with customers, following up invoicing, quotes, all of those things. It narrows down more to relationship management and customer service.”

Building a business and finding success using the skills he developed at the bank is one thing, but banking seems a far cry from lawn and garden maintenance; however for Mathew the change was a no brainer.
“The main reason to be honest with you was my son,” he divulges.
“My son turned around to my father one day and said ‘Dad just doesn’t have time to kick the footy with me’ and that just broke my heart. Plus the bank was changing and I’d had enough.”
“I did run my own independent gardening business about 18 years ago as a young fella and loved it,” he said.
So he made the decision to go back to what he loved and has never looked back.

SETTING HIMSELF APART
It may come as no surprise that after years of working in the corporate world, Mathew prides himself on maintaining a professional image. For him, it’s one of the elements that sets him apart from competitors.
“One of the keys things is that we do operate a professional business. I’m sure a lot of people say that, but we do look professional,” he said.
“We are always in uniforms, we’re always clean, we turn up when we say we’re going to. I’m also the actual person that whoever is calling deals with over the phone, but also generally on the job as well. I might send the guys out to do the work, but I’m still a client’s first point of contact. It makes a big difference I think.”

WINNING CONTRACTS
Those relationship building skills have landed Mathew some pretty big jobs and some pretty big clients, not to mention contributed to enormous growth in the business.
“I was a relationship manager for probably four of five years at the bank, and then I was a bank manager just before I left, so it’s all about relationships, all about your referral networks. That’s a big part of the business and that’s also why we’re probably one of the larger ones in the Eastern suburbs: because I have a huge referral network,” he explained. 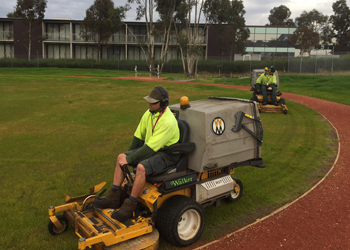 Mathew operates the business from his home in Lilydale, in Melbourne’s outer east. Its proximity to the Yarra Valley’s plentiful vineyards, the bulk of Melbourne’s golf courses, and ever increasing number of residential housing developments means there are plenty of gardens to maintain.
“Last year we did pick up a large contract at Heritage Golf Club, which is awesome,” he said.
“We successfully won one of their tenders. They have five body corporates within Heritage itself.”
And he emphasized, “They are manicured gardens!”

At The Heritage he is responsible for maintaining the irrigation systems in common areas as well as in the individual private yards, cleaning the underground carparks with blower vacs, lawn mowing, running a seasonal planting schedule, garden maintenance, and even taking out the bins every week.
“We’re there one to two days a week,” Mathew said.
“We normally have two guys there, myself and someone else. But every two to three months I normally bring all my crew in because there’s a lot of hedging there. We do one ginormous hit with the machinery and just go for it.”

His crew consists of nine staff members including one part time administrator. In addition to the private contracts they all help to maintain, they also have several contracts for a number of government owned residential and commercial housing sites.

As the business has grown, so has his fleet of power equipment. He has two Fuso trucks, two Holden Colorado utes, two 42” Walker mowers, two BOB-CAT ride-ons (52” and 36”), and for large slashing jobs, he has a Kubota 36hp tractor mower with 60” rear discharge deck. All of his blowers, hedge trimmers and chainsaws are Shindaiwa.
About the Shindaiwas, he adds, “I’ve had those since day one and they’ve been awesome!”

He also has seven push mowers: four Husqvarna 21’” self-propelled mulcher mowers and three 21” Honda self-propelled mowers.
“We all love the Husky mowers. They would be used 95 per cent of the time as they leave such a fantastic finish to every lawn in both wet and dry conditions,” he said.

Mathew gets his machinery from both Croydon Mower Power and Dandenong Mower Power, and what he and his crew can’t fix themselves, they entrust to the pros.
“I don’t stuff around with trying to change certain things on mowers. If they’re broken, I send it straight to the people who know what they’re doing,” he said.

For Mathew, he loves that every day on the job is different.
“One day you might be up on a three foot ladder pruning a hedge, the next day you might be on a brushcutter all day, or sitting on a ride- on,” he said.
“The guys often come home, because we all meet up at my place at the end of the day, and say ‘We’re really happy with how we left this job because it just looks awesome’, so they are the things that we love about the job; that’s the stuff that’s really gratifying.”