Using technology to deliver on service

Stephen Smith was an aircraft engineer when he joined his father in the 58 year old power equipment business in 1995. Stephen was responsible for the management of the workshop, and was frustrated with the complexity of the industry with so many brands and supporting parts systems. Stephen purchased the business on his father’s retirement in 2012 and set about introducing interactive technology.

INCREASING EFFICIENCY THROUGH TECHNOLOGY
Having used phones and iPads to increase efficiency around the home for years, Mr Smith decided to trial iPads in the store. Originally, he thought he could use iPads instead of paper brochures. “I thought about how I could put a couple of iPads on the counter and keep brochures on them, because paper brochures just get cleaned up and put in the bin. With a digital brochure, even if it gets put in the trash bin, you can still get it back,” he explained.
Mr Smith started by uploading Honda and Husqvarna brochures to the iPads, and soon saw their value and place in the store. Customers started asking about whether they could email themselves copies of the brochures.
“We set it up so they could email brochures to themselves, and they loved it. Customers were involved in the process, and all they had to do was touch the iPad and they take something away from the business. It is a real plus in terms of a transaction. Every business’s dream is to have customers leaving saying ‘wow’, and that’s what we saw,” he said.
When Mr Smith first started trying to increase efficiencies, he made up barcode books for easy scanning.

“I would cut images out of the suppliers’ books and it would take me months. I would print out the barcode and stick it underneath each picture, and that was how we billed parts. It worked quite well, but as the years went on, the books got trashed. Eventually I thought, ‘What if I could scan a barcode to my phone and scan stuff off that?” he said.
From here, Mr Smith turned to the internet to find a scanner that would pick up barcodes from a digital screen. While he didn’t have any luck the first year, he persisted and found a company called Wasp Scanners. After much back and forth with the company, it was confirmed that the scanners would work on an iPad or iPhone screen, and Mr Smith was given a dealership discount and distribution in Australia for the scanner. He said it has revolutionised the way he does business.
“It’s a Bluetooth scanner which is portable, so there is no lead on it. You can walk around your whole business scanning codes, and if you go out of range of Bluetooth it remembers every code you scanned and uploads them all when you’re back in range. It’s also shock proof, so you can bounce and throw it around,” he said.
With much outdoor power equipment being large and difficult to get to a counter, Mr Smith said that many stores still operate in an “old school” fashion, which not only decreases efficiency but leaves more room for error.
“A lot of shops in our industry don’t even have a scanner. They type every product number in individually. It’s so inefficient, and it’s a recipe for disaster,” he said. 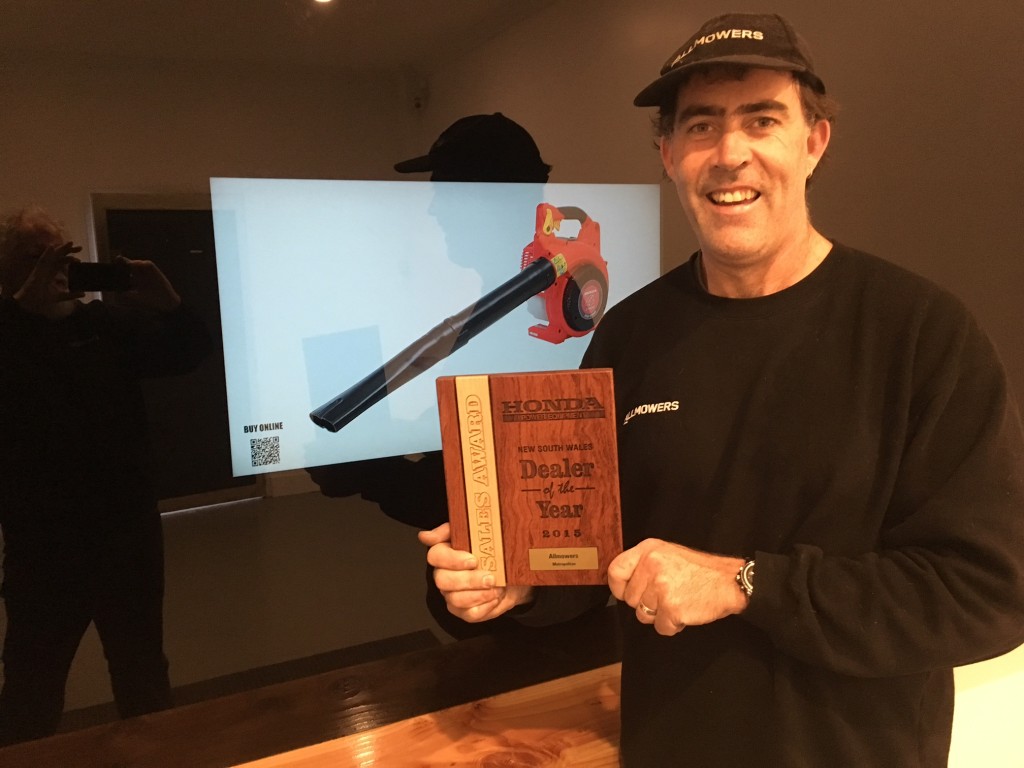 GIVING BETTER SERVICE
While it is a common assumption that technology can draw customers away from good old fashioned face to face service, Mr Smith said it has aided his customer service exponentially.
“It actually creates face to face service. Like it or not, everything’s going digital and if you ignore it, the face to face service will go away. I’m about bringing face to face and digital together so people can use digital products in the shop with the assistance of staff. I don’t want people to go away and buy things online. You want them in your shop, using your technology, buying your products,” he said.
Mr Smith is doing that now using the brand new Abrain technology.
“Abrain is a giant sized touch screen. It has an industrial monitor, as well as a touch screen in between the monitor and the glass. The touch screen is connected to an iPad via Bluetooth, so when you touch the screen you’re actually operating an iPad. I’ve got every product brochure on there, and because the screen is huge, it’s easy to read. You can stand there with a customer and use it as a tool to explain things to them, rather than them sitting in their lounge room at home trying to figure it out on a small screen,” he explained.
Abrain allows Allmowers’ customers to use a speaker to read brochures out, play product videos, or view brochures with detailed product information – and then purchase products using QR codes which customers can scan with their phones. All of this information is stored on the Abrain cloud, which Mr Smith has developed, meaning that this wealth of information can be accessed anywhere, at any time.
“Every staff member of mine has the cloud on their phone, so all those brochures, videos and QR codes are on our staff’s phones. The whole shop is in our pockets all the time,” he said.
With digital reward programs running through the popular system ‘Rewardle’, customers can use their phones to see how they will benefit from spending at Allmowers.
“It gives them motivation to shop with you because they know if they spend a certain amount they get a free service and so on,” Mr Smith explained.

ADVICE FOR DEALERS
Mr Smith said that he strongly encourages the use of technology to assist both staff and customers.
“If you want to free up your mind, just do it because it’s easy. The technology I use doesn’t take over the shop. You can choose whether you use it and how you use it. It’s just an assistant and a helping hand,” he said.