Gianni began designing walk behind tractors in Italy In 1957, and took a keen interest in farming machinery. Between the 60s and 80s, he started developing a wide range of motor scythe mowers, as well as expanding on agricultural equipment. When Claudio Ferrari joined the company in 1979, he founded the Officine BIEFFEBI, which started the development of equipment such as mowers and snow throwers for power-tillers and tractors. Together with Franco Maletti and Georgio Ferrari, Gianni Ferrari has continued as a family run business, with new generations stepping up to work in the company. Alessio Ferrari, Gianni Ferrari’s grandson, is now the sales manager for the company. Alessio, as well as Gianni Ferrari distributor John Bird of JSB Equipment, spoke with PEA reporter Lauren Butler about the company’s history, accomplishments and the process behind the making of a Gianni Ferrari Mower.

According to Alessio, Gianni Ferrari machines are built in Italy’s ‘Motor Valley’, Emilia-Romagna, which is one of the world’s largest and most respected areas concerning motors and hydraulics. Alessio said that the wealth of knowledge and quality goods available in the local area translates to a quality product which the company is continually seeking to improve.

“It is in our DNA to invest money and try to be as best as possible. If you came to Italy tomorrow, you could start from zero and create your own car. Within 10 kilometres you could find all the suppliers,” Alessio Said.

Unfortunately, many companies in the area were forced to shut down due to the Global Financial Crisis in 2008, but according to Alessio, the area is still considered to be one of the most important in the world for mechanisation. John said that in his experience, the parts for the Gianni Ferrari mowers are some of the cheapest on the market, but also some of the best quality.

“I went to a big trade show and I was looking at all sorts of spare parts and things, and I am thinking, ‘it is so cheap, but it is the best quality’. I could not figure it out. There is an absolutely huge market, and they have to compete, but quality is always the dominant thing,” John said.

With cost being such a big consideration in the mechanical industry, several Italian companies have looked to China for supposedly cost-effective buying; however, Alessio said that these companies are returning to Italy after the realisation that buying from China is more expensive than it appears.

“They go there to make it cheaper, and they think it will be cheaper, but it is important to check their way of working, the quality, and the shipping costs. There are often troubles with warranties and in the end it does not save them any money,” Alessio said. 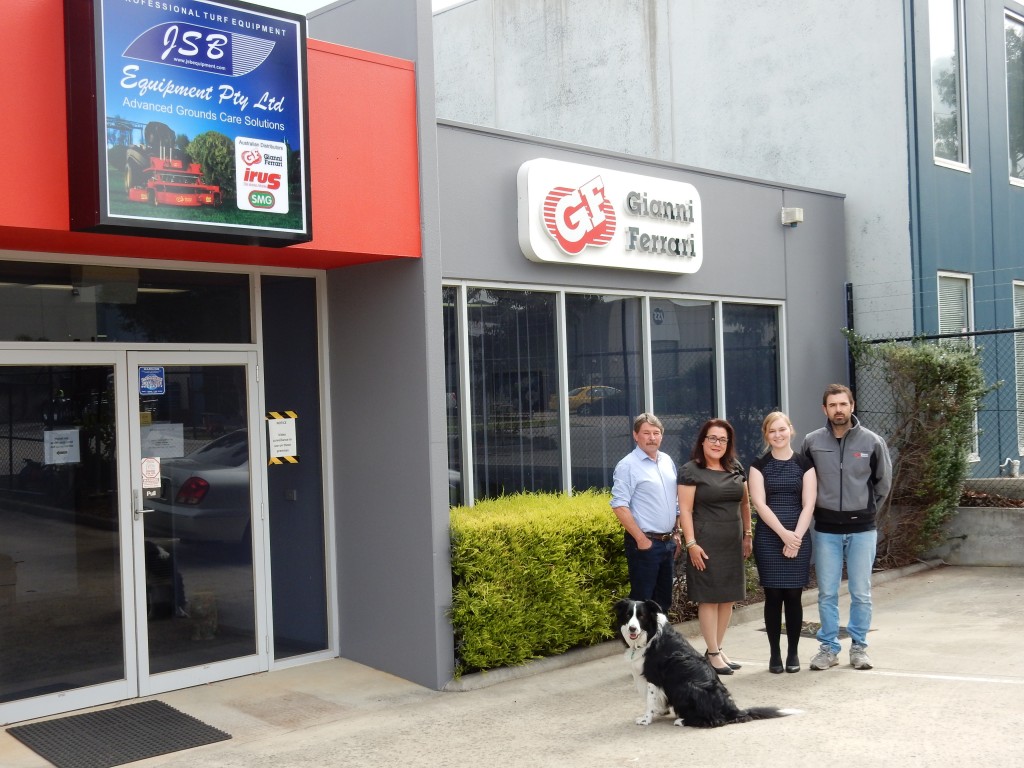 Alessio attributes much of the in-house quality of Gianni Ferrari products to the innovations of Gianni back in the 60’s. He explained to PEA that Gianni created his own gears for tractors, and that his design is still in use within the company today. John added that a new wave of engineers have also been invaluable to the company.

“We find them fantastic to deal with because they think like us and talk like us. If you have a problem, you contact them and within six weeks, very often there is a change to the whole machine and they react straight away. Italian engineers are fantastic for listening and improving continuously,” John said.

The widespread use of Gianni Ferrari mowers means that they are built to excel in a number of conditions and climates, including varied and sometimes harsh conditions within Australia.

“Back in 2003 there were some issues with the cooling. In 2003 and 2004 they introduced a whole new way of cooling the engines with better and larger radiators and they are double the size of what some companies put on the engines, so we are very satisfied,” John said.

“Engineering in Europe, Canada and America is between the 40th and the 60th parallel of the equator. The heat game is totally different in that regime. Here in Australia, we are in the 20th parallel at Cooktown and the 40th at Tasmania, so there is a very scientific thing that goes on with the engine design and testing. Gianni Ferrari reveals things that most other companies would not,” John said.

The decision to go global was a natural progression for Gianni Ferrari, with a proven need for mowing machinery internationally. Due to an initial lack of widespread awareness, the company took it upon themselves to exhibit the benefits of professional mowing equipment to Europe.

“We started in the 90s and at that time professional mowers were not known about in Europe. At the very beginning it was very difficult to justify the cost of a machine like ours. Then the councils started to see the productivity and the quality and it was an easy job for them. We started to make a local exhibition in Italy and people were coming from all over Europe. We started in 1989 and the first distributor outside of Italy was from Hungary in the 90s. Within five years we covered the whole of Europe. We were one of the pioneers in the introduction of professional mowers,” Alessio said.

Not only have Gianni Ferrari been pioneers in the introduction of professional mowers, but they have also been pioneers in the development of mowing equipment and innovation. John said that from an Australian perspective, the reverse rotation mower deck has been a key innovation, despite copies starting to emerge within the market.

“It has been the biggest thing we have sold in Australia and the patent Gianni Ferrari has on it has already been partially copied by a competitor. Technically they are in breach of the patent but they have not done it the same way and it does not work for them, so we are not getting too fussed about it,” John said.

With innovation at the core of the company, patents have been an important way of protecting Gianni Ferrari equipment from being copied. According to John, the best patent Gianni Ferrari has invested in is the clean air dust and pollen filter. This has been particularly useful in Australia, especially in dry climates. Gianni Ferrari has been asked to sell the patent; however, Alessio said that it is too valuable for the company to lose.

“In Europe we are a wet country, so it is not really as important there as it is in Australia. We were the first manufacturer in the world with front deck and direct collection but it has now been copied. Normally if you have direct collection the deck is in the middle because it is easy, it is a short distance and you have no problem with the engine because the engine is in front. During 1993 and 1994 we thought to put the deck in front, the engine on the top and then the tunnel under that was collecting the grass. We were the first, and it was patented. Unfortunately at that time we did not have enough money to make a strong patent, and then ten years later someone has copied us with some modification on the patent, which is easy to do if it is not strong. Now everyone is copying us,” Alessio said.

Alessio said that the company and the Ferrari family have much to be proud of in terms of the company’s success. For Alessio, the proudest achievement was the Gianni Ferrari Turbo 4.

“Back in 1998, it was the first large, 4-cylinder, four wheel drive lawn mower with a front deck, central collection and a high lift elevator. Others have copied us, and are still trying. This is the most professional lawn mower, and my proudest achievement,” Alessio said.

When it comes to new innovations, Alessio said that the process involves a collaboration of ideas and ingenuity.

“We are Italian; we take a coffee at seven o’clock in the morning and meet together. I am not an engineer, I am a lawyer – but I say, ‘last night I dreamt about this. Can you do it?’ I talk with my engineer and my best engineer is not a formally trained engineer. His name is Giuseppe, he started to work at 10 years old, and now he is 60. He is a genius. He has ideas, I give him my ideas, and then it comes about,” Alessio explained.

According to Alessio, while he is not an engineer, he has come to know the needs of the customers. As the company’s sales manager, he meets with customers, talks to them about how to improve and presents this to Giuseppe.

“We are Italian, and it is in our DNA to design. We grow up with footballs and engines – we’re somehow inventors,” Alessio said.

Understanding and meeting the needs of customers is at the forefront of Alessio’s mind when it comes to new products. The company’s measurement of success is also based on the happiness of its customers.

“We measure success not on sales, but on customer satisfaction. I was in Germany, and a customer came with me to have a beer and he said, ‘you are the Fendt of the lawn mowers’. That was a great reward. Fendt tractors are considered the best tractors in the world. When customers are happy, that is the best reward we can have. Obviously figures have to be good, but when you see a happy customer, you cannot ask for better,” Alessio said.

John believes that customer satisfaction is heavily based on the quality of the products, and the fact that they are the product of European engineering.

According to Alessio, the continued success of the company is down to following the company’s mission as well as predicting and preparing for future demands.

“The mission is to try to be the best, try to be the first and try to think about the future of mowing in the next five to ten years, because now in Europe we are facing problems with emissions and noise. Two years ago we launched a prototype with collection at the largest European agriculture and garden fair and we were the first to launch the lithium battery ride on mower, which should be ready this year. We try to think further, long term. In Germany you are not allowed to cut the grass on Saturday and Sunday because your neighbour will be annoyed, they have to rest. If you have an electric mower that is quiet then you can cut the grass on Saturday and Sunday, so that will be a big advantage,” Alessio said.

The future is exciting for Gianni Ferrari, with new machines and technology on the horizon.

“Much bigger machines are coming, it is revolutionary. The electric mower is part of that. The keys things are bigger horsepower, higher performance, and bigger capacities. Dealers have been asking for a long time, can we do a wider cut on collection, and the answer will be yes,” Alessio said.