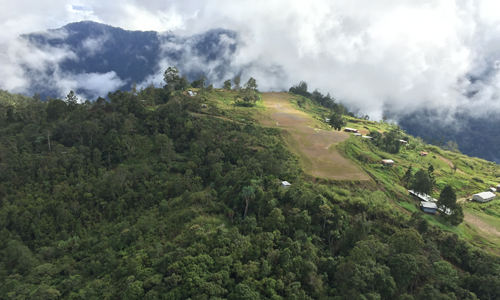 Papua New Guinea has some of the most rugged and isolated landscapes in the world. Out of 800 airstrips constructed to service Papua New Guinea’s remote communities, only 300 are operable. The Rural Airstrip Agency in PNG has partnered with Deutscher Mowers in their mission to restore these life-giving airstrips. Kiera Taylor reports.

As a developing nation, Papua New Guinea (PNG) once relied on airstrips to service its remote and rural communities. However once roads were constructed, many of the airstrips ceased being used and fell into disrepair. Since that time, PNG’s rural roads have also been left largely unmaintained and many are now impassable, once again making airstrips the most effective means of providing essential services, and a connection to the outside world, for the 82 per cent of its population who live in remote communities. The Rural Airstrip Agency (RAA), headed by CEO John Bromley, was established in conjunction with the Mission Aviation Fellowship (MAF) to restore PNG’s unusable airstrips. According to Mr Bromley, a usable airstrip in a remote community means life or death to its inhabitants.
“When people get sick there is no means of getting them health attention,” he said.
“Here in Papua New Guinea if they are seriously ill, they have to be medevac’d out to a hospital. So without an aeroplane to provide an evacuation, they die.” 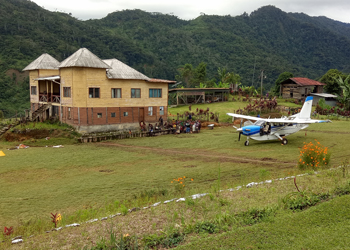 MAINTAINING AIRSTRIPS
The RAA deliver the Integrated Rural Airstrip Maintenance Program (iRAMP), which executes two specific courses of action.
“The First is a maintenance program that is aimed at airstrips currently in use that require maintenance to keep them operable. Second is the restoration program that is aimed at airstrips that have been closed, sometimes for a long period of time, and require a lot of work to bring them back to a usable standard,” Mr Bromley said.

Restoring and maintaining PNG’s remote airstrips is no easy task. They range from 300 metres to one kilometre long, and are between 30 to 50 metres wide. That’s a total of 1.2 to three hectares of land each. Many are undulating, on steep slopes (up to 12 per cent inclines) and are situated on the sides of mountains.

Although there are currently 300 airstrips in use throughout PNG, only 45 are maintained as part of the program, and six are currently undergoing restoration.
“We are hoping to get to about 650 [usable] airstrips in the next few years,” Mr Bromley said.

Understandably, restoration can be a laborious task, and takes entire communities getting involved. Often, trees need to be cut down, stumps uprooted, holes filled, drainage cleared or even created, grass cut and cleared. It can take anywhere from three days to 12 weeks, particularly if heavy machinery is required.

Regular maintenance requires mowing the strips, clearing drainage ditches, clearing any erosion, and levelling off the occasional hole dug out by wild pigs.
“It’s an ongoing process, where we encourage our maintenance and reporting officers to [attend the strips] on a daily basis,” Mr Bromley said. 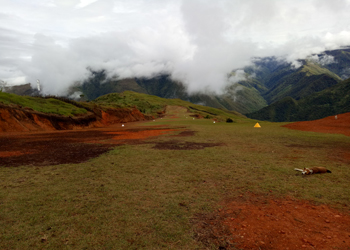 LOGISTICS AND FLEET
The RAA is operationally headquartered in Goroka, where the heaviest machinery in their fleet is kept. Much of the equipment was sourced internationally and shipped to the port in Lae, then transported by road to Goroka in the organisation’s own Izuzu 4WD truck with crane. Mr Bromley said that the decision to purchase the machinery they did came down to size and durability.
“One of our major challenges is the equipment we use needs to be light enough to be airlifted by helicopter into the remote areas because we don’t always have road access. So the equipment has to be small enough, yet durable and strong enough to enable us to do what we need to do,” he said.

For restorations, they use: a 4WD tractor with a turbo charged Kubota engine from the Czech Republic, which performs well at PNG’s highest airstrip at an altitude of 9000 feet; JCB mini excavators with steel tracks, which allows the machine to operate in muddy conditions; and Red Rhino rock crushers from the United Kingdom, which crushes river rocks into gravel to be used in drainage systems.

For ongoing airstrip maintenance, they use Deutscher mowers.
“We purchased the lawnmowers from Deutscher Mowers in Ballarat, Victoria. They seem to be the best for what we need because they are very robust,” Mr Bromley said.
“Also they are self-propelled. They are the compromise between a normal push mower and a ride-on mower, and because of the areas we put them in, maintenance is sometimes a bit of a challenge. Ride-on mowers and small tractors, over the years, have proved to be not practical.”
“Deutscher mowers have been sold up here in PNG for a number of years. We recently purchased 40 lawn mowers and we have placed an order for quite a few more,” he said.
“We have an ongoing relationship with them. And Deutscher provides very good service,” he explained. 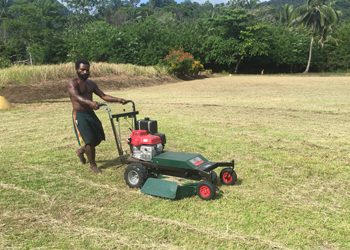 OPERATIONS AND SERVICING
Once a community agrees to restore their airstrip, cleared the land and it is ready for use, they shift to the maintenance program. The community elects two to four willing young men to maintain the airstrip; they are given a lawnmower and undergo training in machinery usage and equipment maintenance. “They are required to report to us on a daily basis,” Mr Bromley explained.
“In their daily report they let us know if there is something wrong with the mower or if they are running out of consumable items, which we get out to them on the next flight. They are trained sufficiently enough to be able to change the consumable items that breakdown on the machines in between the quarterly service periods. Once a quarter we fly a mechanic around to the various airstrips and he services the lawnmower, provides them with fuel for the next quarter, inspects their work, and pays them according to the work they’ve done,” he explained.

The RAA have their own mechanic on staff who services the restoration equipment which often happens in the field. They are given support by the overseas manufacturers, who travel to PNG annually to provide training to RAA staff.

GIVING NEW LIFE
According to Mr Bromley, the biggest change he has seen to a remote community by having a usable airstrip is in the way of healthcare and education.
“As soon as the airstrip is open we usually see several medical evacuations take place,” he explained.
“The health worker is usually the first to come back because they now have contact with the outside world to get the support they need. Teachers return so kids go back to school, and then the community starts to sell its cash crop and it gets them some income,” he said.
“The community comes to life again basically.”