Motor Mecca: in it for the long haul 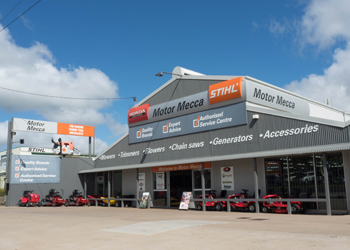 You know that someone is passionate about what they do when it is all they have ever done. And such is the case for Nathan Wessling, owner of Motor Mecca in the Queensland town of Toowoomba.

The business was established by a husband and wife team in 1979. Nathan’s parents Neville and Pamela, bought into it in 1986, then took on sole ownership in 1998. When Nathan finished high school in 1996, he jumped into the business full time.

“I sort of worked [in the shop] through grade 12 after school, and before that through the holidays,” he explained.

“I went straight into spare parts… I pretty well have been in spare parts the majority of time I’ve been here. Up until the last five or six years I’ve been doing other things, but spare parts was the thing I took under my wing and ran with,” he said.

Longevity seems to be the order of the day at Motor Mecca. It’s a place where dedication to the job converges; either that or there’s something in Toowoomba’s water. With Nathan at the helm, the shop employs 15 staff, some having worked there longer than him.

“We’ve had a good record of long term staff,” he said. 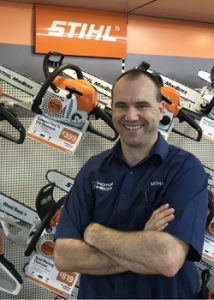 Nathan says the secret to staff retention is to work hard, have fun, and to know your limits. “We all treat it [the business] as a family. You come to work to do the best job for the customer. But you’ve also got to spend so much time with each other that you try and make it work. You can have a joke, you can have a laugh, but at the same time everyone knows that you’re serious when you’re dealing with your customers,” he said.

“Everyone is involved. It’s not like we’re sitting in an office barking out orders. We’re out assembling stock, washing mowers… everyone gets in and does what they’re supposed to.”

Sadly, Nathan’s father passed away in 2016 following a long-term illness, during a time of transition for the business. Prior to buying into the business back in the Eighties, Mr Wessling was a Business Manager at a car dealership in Biloela, and when he came across to Motor Mecca, all administration was done manually in ledgers. So he brought the computerised management program from the car dealership with him.

But as times evolved and more supplier processes became digital, the ageing program was no longer fit for purpose, and the Wesslings needed something better equipped to handle sales invoices and warranty claims. Nathan says that the developers in charge of the old system were less and less interested in making improvements, and less inclined to listen to feedback.

“It wasn’t evolving anywhere, and the guys who owned it had really just parked it and were concentrating on their other bigger programs,” he said.

After attending an industry conference in Bali in 2011, Nathan and his father were introduced to Sprockit dealer management software.

“With our old system, we were handwriting new unit invoices, and it didn’t have a good showroom package so we were still fairly manual… now [with Sprockit] we can sell a product and you know what stock has gone out as soon as it’s sold, you don’t have to go back through your green dockets and see where you’re at before they get processed. And it means Jodie doesn’t have to go through and manually type all those new purchases in the next day. It has freed up time for her to do other things that we hadn’t previously had time to do,” Nathan explained.

But the Wesslings didn’t take up the program immediately, instead electing to wait and learn about the experiences of other dealers who had integrated the software in their businesses. 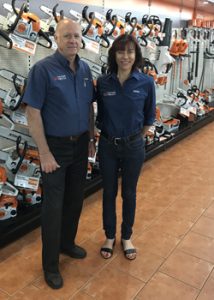 Sales Manager, Max Brown, and Administration Assistant, Jodie Dau, both have over 25 years of service in the business.

“Sometimes you’re an early adapter to things, and sometimes that can backfire, so we let it get going first. We started talking to a few people who were using it and they were fairly happy with what was going on… we got an idea about what sort of company we would be dealing with and how the relationship would evolve, and whether it would be a good, easy-going relationship,” he said.

After making the decision to integrate Sprockit, Nathan says he no longer feels like he’s the minority like he did when using the old system.

“It [Sprockit] integrated with STIHL much better, and it was OPE specific. So you became the majority for the program whereas before we were a minority, and not just an afterthought if you wanted anything. If anything is going to be developed [with Sprockit], it’s actually going to suit you, you’re not just pushed to the side,” he said.

“It’s going to continue to evolve and get better, and it’s actually for our industry, whereas we didn’t have that before.”

“The service and the backup is great. You can ring and they’ll answer the phone 24 hours a day… they’ve got your back and there doesn’t seem to be a dumb question you could ask,” he said.

Traditionally, the Wesslings used radio and TV to market the business, which included a catchy jingle (call the shop and ask to be put on hold – it will get stuck in your head!) that Nathan reports was quite successful back in the Nineties.

“We still have people, as soon as they hear ‘Motor Mecca’ they’ll start singing it to you!”

But lately Nathan has opted to explore digital avenues, and to contribute to community efforts to ensure the business name is out there.

“I’m just starting to fiddle with Facebook and Google Adwords a bit more,” he said, “but TV has always been our main focus over the years.”

“The local firefighters do a charity golf day for the Toowoomba Hospital Foundation so we always give them a prize, and there are a few schools and local community events that we supply prizes for as well.”

As Motor Mecca approaches its 40th year in operation in 2019, Nathan is enthusiastic about the businesses future and continuing to grow in line with the community.