Tropical Forestry Services (TFS) was founded in 1997 after successful government trials in the plantation growth of Indian Sandalwood. TFS now manages the largest area of Indian sandalwood plantation in the world, with over 10,500 hectares across all sites. With its first commercial harvest completed in 2014, TFS has a large fleet of power equipment for its lopping and maintenance operations, and an ongoing relationship with Aussie Pumps for its irrigation. PEA reporter Lauren Butler spoke with deputy general manager of operations for TFS, Matt Barnes, regarding the Burdekin plantation’s operations, equipment, and the challenges of irrigating and maintaining the expansive land. 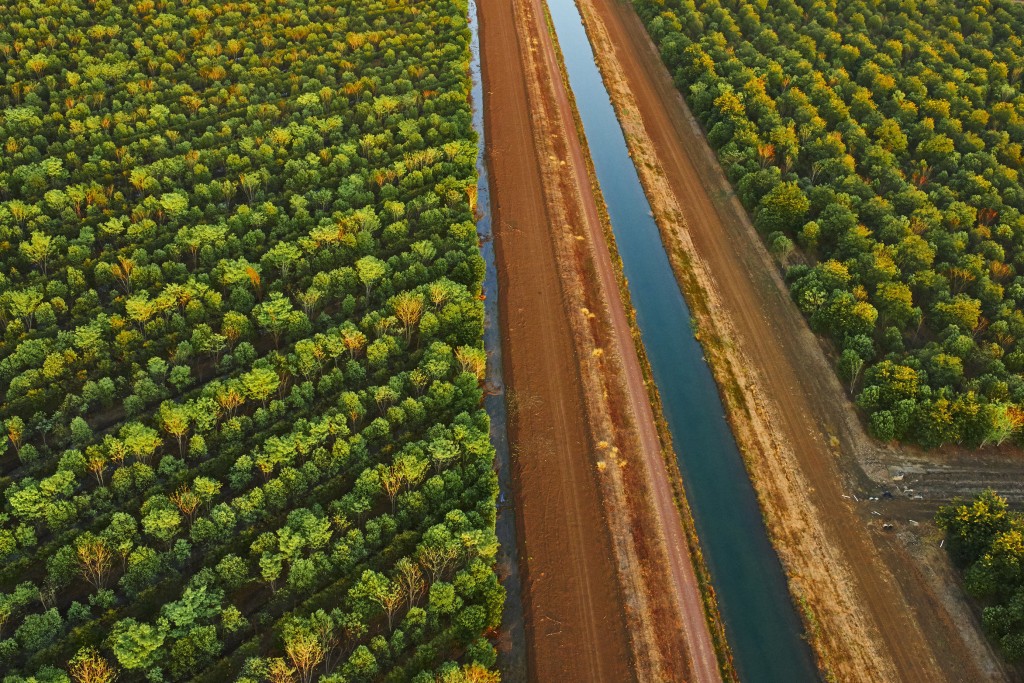 TFS has five plantations, with Kununurra and Kingston Rest plantations in Western Australia; Douglas Daly and Katherine plantations in the Northern Territory and the Burdekin plantation in Queensland. The Burdekin plantation, which begun in 2012, has roughly 1500 hectares of irrigated and planted land. Mr Barnes, who helped to set up the operation for Burdekin, said that the area was previously a sugar cane plantation, and that most of its systems had to be set up from scratch. While the existing irrigation system could be retained, its design could not fully cater to the needs of the new plantation.

“The Burdekin area where we are operating is exclusively flood irrigation, from either a channel system or an underground pipe system. It is set up more or less for row cropping like cane, and we basically needed to find a way to make the water stretch further,” Mr Barnes said.

According to Mr Barnes, the trees need constant watering to establish as young seedlings, and the Burdekin plantation can plant over 100 hectares in one week.

“You cannot water that much in a week, so we set up a temporary drip system when the trees are young. We lay flat hose pipe and light wall drip tape, and run the system to get them established. That is where the pumps come in,” Mr Barnes said. 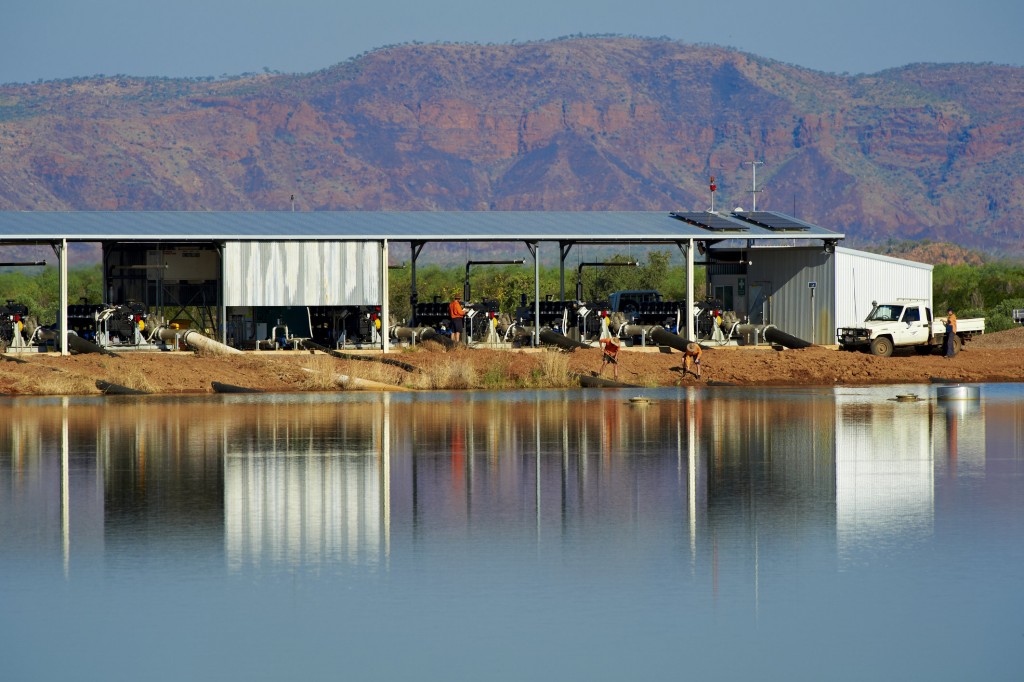 Years earlier, TFS’s Kununurra plantation had similar issues with drip irrigation. In 2005, the company started using pumps by Aussie Pumps to stretch the reach of water within the plantation. The pumps have allowed TFS to grow in areas where tree plantations might not otherwise survive.

“We use Aussie Pumps because they are mobile, we can use them in other places the following year, or we can move them between sites. They fit the bill when we need to get the trees established, and then once they are going, between six to nine months of age, they only need watering every two or three weeks. Then we can utilise the existing infrastructure,” he said.

The Netafim drip irrigation system which TFS uses is assisted by Aussie 6” and 4” Quick-Prime diesel powered transfer pumps, which draw water for the system from irrigation channels supplied by the Burdekin River. The Aussie Quick-Prime pumps offer flows of up to 2900 litres per minute, heads of up to 28 metres and will self-prime from a huge 8.4 metres direct lift. The pumps, which are powered by Yanmar diesel engines, are sometimes required to run on the plantation for up to six hours a day, and have been fitted with 19 litre long range fuel tanks which, according to Aussie Pumps, offer low fuel consumption and maximum pump performance.

Not only is this kind of drip irrigation efficient for TFS, but according to the company, it has improved seedling survival rates and reduced water usage on the plantations by more than 80 per cent. Along with its water recycling plant, TFS has saved 28 million litres of drinking water across its sites since 2010.

All of TFS’s plantations rely heavily on power equipment for general site maintenance as well as providing for the trees’ growing requirements, and the eventual harvesting process. According to Mr Barnes, the company uses everything from chainsaws to skid-steers. He explained that all operations involving the trees are focused around the end product, which is taken from a particular part of the wood.

“What we are doing is all about heartwood. There is a heartwood core inside the tree, surrounded by sap wood on the outside. They are distinctly different colours; you can see the heart wood is a ring of darker wood inside. When we harvest the tree, we pretty much chase back the heartwood, starting at the top and cutting until we find it. It only extends for some portion of the tree, and not right up to the top of the trees, so we chase it down by cutting it into lengths until we find some. That is mainly where we use our chainsaws, particularly when we lop the tops off the trees once they are extracted from the ground. Most of our chainsaws are Stihl and Husqvarna,” Mr Barnes explained.

The harvesting process is undertaken by manually-operated machinery, assisted by automated attachments. While it can take 15 years for the sandalwood to reach the harvesting stage, the number of trees and scale of the plantation means that the task is a huge one.

“The harvester itself has a mechanical saw on it which is automated. It is a grab and cut implement which fits on the front of a skid-steer, which is like an oversized bobcat. It cuts the tree off at ground level and then we go back and core out the stump as well, because it has heartwood oil in it below the ground,” Mr Barnes said.

Mr Barnes also explained that the company uses ride-on deck mowers to maintain the areas surrounding planted land, and often requires generators for plantations that have restricted access to power. It also relies on Kabota and John Deere tractors for multiple applications.

“It’s not traditional forestry in a sense, it’s more of a horticultural tree where we do a lot of weed control with tractors, we do a lot of mulching and slashing with tractors, even trimming like hedging with sickle bars mounted on a tractor. We use a lot of front-end loaders; tractors with forks and buckets on them,” he said.

The site’s location at Burdekin presents some challenges with regards to size and proximity for servicing; however, it is relatively close to civilisation compared with some of the other plantations.

“Burdekin is probably our best site in terms of proximity. It is close to population, even though it is about 80 or 90 kilometres from Ayr. It is isolated for the Burdekin area, and is one of the most outlying areas in the irrigation area, but it is much closer to civilisation than anywhere else we grow them. There is much better service backup there, like contractors and parts providers. Size comes with the challenge of keeping track of everything. Just to drive around 1500 hectares and check things is hard. Some of the farms can be up to 4000 hectares, so it starts to get quite big,” he said.

A number of aspects play part in what equipment is chosen at TFS; however, Mr Barnes said that one of the most important things to consider is the ease of follow up servicing.

“We vary our brands a fair bit, depending on the site. We tend to go for ones that are more easily serviced. Sometimes here, you only get one or two brands that can get serviced at all, and a lot of it comes back to the backup parts and availability. Generally as a rule, we rely on the people we buy the equipment from to back us up with service. Sometimes with isolated areas, the servicing will go a long way towards selecting where we buy equipment from, just because we know the backup is there. Even if it is dearer to start with, a company might have a really good servicing arrangement, which carries a lot of weight,” Mr Barnes explained.

Another important aspect of equipment selection for TFS is safety. For this reason, the company has chosen to use equipment that uses diesel fuel, and will not purchase products requiring petroleum.

“We have actually switched from petrol to diesel due to safety. Diesel is a lot less flammable, so when you are refuelling equipment there is a lot less risk with diesel fuel. Fire is a big risk to the trees as well as the people. We are always looking for better ways to keep operations safe,” Mr Barnes said.

To keep things running safely and effectively, Mr Barnes said that the plantations each have a mechanic on site.

“They tend to do the basic servicing on site. Generators here run 24 hours a day, seven days a week, so our mechanics are servicing them every 10 to 12 days. We cannot always call someone out for that sort of thing, so we do some of that ourselves,” Mr Barnes explained.

The systems and equipment in place at the plantations make it possible for TFS to retain a focus on sustainability, as well as create high quality products and contribute back to the community. Once the trees are harvested and cut using chainsaws, they are processed at the Mount Romance processing facility in Western Australia; the world’s largest distiller of sandalwood oil. The trees are eventually used to create high quality wood products and pharmaceutical grade Indian Sandalwood oil.