What is ‘Australian Made’?

We all know that the amount of outdoor power equipment manufactured in Australia these days is less than it used to be. But what does ‘Australian made’ actually mean? And does it really matter in OPE?

Searching through the database of 20,000+ products on the official Australian Made website reveals that only around five pieces of outdoor power equipment – all pumps – are licenced to carry the green and gold triangular ‘Australian Made’ logo.

This is perhaps not surprising, given it is no secret that these days, with the exception of a few, most Australian outdoor power equipment factories are more or less assembly lines rather than full-blown manufacturing facilities.

It is also no secret that labour and components are cheaper overseas than they are on home turf. Since the dawn of globalised industry, there has been a significant shift to offshore manufacturing, meaning less and less outdoor power equipment fitted the legal definition of ‘Australian Made’.

But recent changes to the Australian Consumer Law (ACL) mean that making country of origin claims may now be easier for Australian manufacturers.

“One of them was that the product had to be made here; the provision in the legislation talks about a ‘substantial transformation’, so it has to actually be made, not just simply assembled, here [in Australia],”

“And the second was a provision that more than 50 per cent of the cost of making that product had to be incurred in Australia. So there was a range of products in this sector that I’m quite sure would not have met those qualifications.”

“But the new criteria only talks about ‘substantial transformation’ and it’s redefined that in the context of how the end product is different from all its imported components,” Mr Harrison explained.

An information booklet released by the Australian Competition and Consumer Commission (ACCC) states:

“…the source of a product’s individual ingredients or components is not relevant to a ‘made in’ claim. This means that a good doesn’t need to contain any ingredients or components from a country to be able to claim that it was ‘made’ in that country. Under the ACL, a good may safely represent that it was made in a particular country if the business can demonstrate that it underwent its last substantial transformation in the country claimed.

Substantial transformation test
Goods are substantially transformed in a country if:
? they were ‘grown in’ or ‘produced in’ that country, or
? as a result of processing in that country, the goods are fundamentally different in identity, nature or essential character from all of their imported ingredients or components…

…As to whether a product with imported ingredients or components has been substantially transformed, this will require a closer assessment of the processing undertaken in that country and its effect on the final product. To be safe under the ACL, the good must have undergone its last substantial transformation in that country such that its inherent characteristics (i.e. its identity, nature or essential character) are fundamentally different when compared to each imported input.”[1]

Mr Harrison explained that what that means for Australian manufacturers is that, “There’s more scope now for companies to access the Australian Made logo for a product that previously might not have met the test because we probably would have failed them on the 50 per cent value add test,” he said.

“It’s quite possible for products that have a significant imported content to now meet the rules for being able to be called ‘Australian made’.”
But what effect will these changes have out in the marketplace? 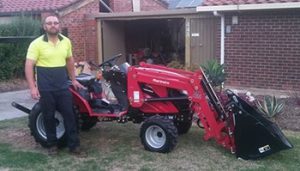 As a commercial lawn contractor, in John Beresford’s experience, Australian Made OPE is not something commercial contractors think, or even or talk about.

“We talk about what machine each of us is using and will tend to stick to whatever has been the most reliable for all of us really – whether the machine is very good, or very bad as well, of course,” he said.

Mr Beresford has been a small engine mechanic for the past 32 years, which he now does part time while simultaneously running his gardening business, JB’s Lawn and Garden, in Adelaide. When it comes to buying equipment for his business, he said “I don’t really go on where the equipment is made. It’s just the quality of the machine. And because I’ve been working on them for so many years now, I know which are the better machines to go for.”

“It’s a sad thing to say, but anything from Japan really is probably the better quality now a days.”

“We really need to think about the quality of the machine more than anything, and how reliable and how long it’s going to last us,” Mr Beresford explained.
But even so, Mr Beresford said that Australian made OPE would certainly still appeal to some.

“I think it would make a difference for some people, probably the domestic buyer more so.”

But should that stop manufacturers from applying for an Australian Made logo licence?

According to Ian Harrison, an Australian made claim is very valuable to manufacturers that export their products to overseas markets.

“There’s a whole group of people who put value on the fact that a product is Australian made. And the reason why companies would label their products with a country of origin claim is to add this value to their product,” Mr Harrison explained.

“And this, very importantly, can lead to getting a premium in the marketplace in terms of price. And that’s very important in Australia because we are a very high cost manufacturing country, particularly in comparison to our northern neighbours.”

“It can be significantly important in many overseas marketplaces. So guys who are making product here and selling into Asia in particular, or even Europe and northern America – it varies from product to product – but the fact that it’s Australian carries significant weight, particularly in the Asian marketplace,” he said.

For manufacturers that are interested in labelling their products as ‘Australian Made’ and using the Australian Made logo to promote this to their customers, Mr Harrison has the following advice:

“They should go online to our website and have a look – the whole application process can be done online now, and they should submit an application for those products. But they can also print the application form off and do it all manually if that is their preference.”

“If they are looking for some advice from us or they need advice as to what they have to do to get over the line, absolutely we’ll give it to them if we can. We want the Australian Made logo to be part of the solution, not part of the problem. The logo is part of helping companies who make things in this country, whether they’re foreign owned companies or Australian owned companies. We don’t differentiate between companies on the basis of who owns the shares. The main game is wealth creation back into the Australian community and out of that, it’s jobs and chances for young kids,” Mr Harrison said.